Cookies help us deliver our services. By using our services, you agree to our use of cookies.

Difference between revisions of "Cousins"

From TNG_Wiki
Jump to: navigation, search

The Cousins mod provides three modules which all include cousins and appear on the inner menu of the Relationships tab:

Apart from the first, these searches can take quite a long time depending on the size of the tree. Therefore the search itself is restricted to administrators and the basic results are cached in the database so that anyone can retrieve them on a subsequent use (including the administrator). The table can be updated when it is necessary, It is also possible that the searches can be computed on a personal computer and uploaded to the webserver. Caution: The computation uses temporary tables and these are usually not available for servers based on USB memory sticks. 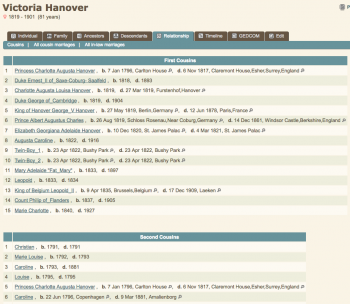 The first display shows for any person in the tree all their cousins, by default from first to fourth, if they have any. The number to display may be set to any number but increasing it to 7, 10 or more will inevitably take more time if at many generations exist in the tree. (Click on the picture on the right to enlarge it.)

The name of the cousin is followed by brief defails of their life. Clicking on the cousin's name will show the relationship between the root person and the cousin including the ancestors through whom they are connected.

Occasional examples are found in many family trees of cousins or other close relatives marrying each other. Although marriages between first cousins are illegal in many US states, more distant cousin marriages are permitted and may be more common than people expect. This display collects all the examples in a tree together. The display puts the names of the husband and wife alongside the names of their common ancestors with dates and places of marriage. The list is sorted by the closeness of the relationship and the date of the marriage.

The number in the "Descent" column shows the number of generations from the common ancestor on the husband and wife's side resepectively. First cousins are thus represented as 2:2, second cousins 3:3 etc. The reason for this is that it is possible to go lower. The picture at the right shows examples of nephew-niece marriages (1:2). Brother-sister incest is represented as 1:1 and father daughter incest as 0:1. The example of Louis XIV and Marie-Therese of Spain shows an example of double first-cousin marriage. Where only one of the ancestors is shared, so that it is a half-cousin relationship, a footnote annotation (*) is added in the descent column and only the common ancestor is shown.

The relationship can be explored by clicking on the husband or wife's name which will always show their marriage first followed by their other relationships. Clicking on an ancestor shows instead a descendancy tree in which the cousin marriage will appear twice. This also works where there is only one common ancestor.

Most examples are not as close as these, and involve more distant cousins. So 2:3 (or 3:2) is a first cousin once removed, . They sometimes occur in clusters and to make these easier to spot, when names are repeated an occurrence number is added in square brackets after the name - [2], [3] etc. These are actually links to a filter which will produce a separate report for the person concerned.

This records multiple marriages between two families. Sometimes two siblings in one family marry siblings or cousins in another family. This strengthens the ties between the two families more than a single marriage but does not in itself bring any genetic implications. It can include affinal marriages such as a man marrying his dead wife's sister, but most such marriages are not properly described as affinal and indeed there is no common name for this. They usually occur in pairs but sometimes happen in groups of three or more.

Examples of all of these are shown in the royal example on the right. A repeated person is also marked with a number in square brackets. Thus Henry VIII is shown three times--not only were Ann Boleyn and Catherine Howard related, but Catherine of Aragon had previously been married to Henry VIII's brother.

The mod is installed in the normal way: unzip it; copy the files to the mods directory on your system, go to the mod manager, select it and press install. However it is strongly recommended that you do this first on a private computer with TNG set up on it because it can take some time to run the initial search, particularly if you have a large tree.

After installation, remember to "Update the TNG Variables" in the WordPress Admin ------> TNG screen if you are using the TNG-WordPress-Plugin

Below are some search results found in several trees. The first two were historic trees dating back at least 1,000 years and including many royalty and nobility. The third is a modern tree but still having a significant number of such relationships. The times are elapsed times on a standard Mac desktop. As you can see, the search time varies significantly not only with the size of the tree but also with the number of hits.

When the system is installed, the cousin marriages and in-law marriages can only be activated by an administrator. Anyone else will simply get a message asking them to contact an administrator. When an administrator runs it, the basic results will be stored in a new table in the database from which they can then be retrieved by anyone at low cost. (The low cost is basically making sure that the proper visibility rules for living persons are observed.) Subsequently even an administrator will get the same results unless they want to redo the search. The inner menu will at this stage look like this:

Clicking on All Cousin Marriages will retrieve the current stored results. To redo the search, click on the "redo" circular arrow symbol.

The search times for in-law marriages were less severe ranging from 0.5 to 6.5 seconds for the above trees, but this is handled the same way thus reducing the risk from repetitive use. You will find that two tables have been added to the database: tng_cousinmarriages and tng_inlaw marriages. You can use different names if necessary using the options below.

There are a large number of options and most of these use a commons settings file (cousins_inc.php). $maxcousins and $generations will affect the maximum time for search if there is sufficient 'width' in the tree to exercise them.

Alan Craxford provided much of the inspiration for these reports with constant feedback. Ken Roy provided the French translation and many useful comments.

If you download and install this mod, please add your TNG sites to the table below.